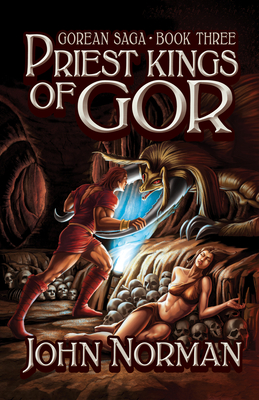 This is book number 3 in the Gorean Saga series.

Blood will be spilled as a warrior searches for his missing wife in "a fully detailed alternate world which is fun to explore" (Fantasy Literature). Tarl Cabot is the intrepid tarnsman of the planet Gor, a harsh society with a rigid caste system that enacts the most brutal form of Social Darwinism. In this volume, Tarl must search for the truth behind the disappearance of his beautiful wife, Talena. Have the ruthless Priest-Kings destroyed her? Tarl vows to find the answer for himself, journeying to the mountain stronghold of the kings, knowing full well that no one who has dared approach the Priest-Kings has ever returned alive . . . Read the entire saga of this brilliantly imagined world where men are masters and women live to serve their every desire. Priest-Kings of Gor is the 3rd book in the Gorean Saga, but you may enjoy reading the series in any order.
John Norman, born in Chicago, Illinois, in 1931, is the creator of the Gorean Saga, the longest-running series of adventure novels in science fiction history. Starting in December 1966 with Tarnsman of Gor, the series was put on hold after its twenty-fifth installment, Magicians of Gor, in 1988, when DAW refused to publish its successor, Witness of Gor. After several unsuccessful attempts to find a trade publishing outlet, the series was brought back into print in 2001. Norman has also produced a separate science fiction series, the Telnarian Histories, plus two other fiction works (Ghost Dance and Time Slave), a nonfiction paperback (Imaginative Sex), and a collection of thirty short stories, entitled Norman Invasions. The Totems of Abydos was published in spring 2012. All of Norman's work is available both in print and as ebooks. The Internet has proven to be a fertile ground for the imagination of Norman's ever-growing fan base, and at Gor Chronicles (www.gorchronicles.com), a website specially created for his tremendous fan following, one may read everything there is to know about this unique fictional culture. Norman is married and has three children.