Say It Out Loud (Hardcover) 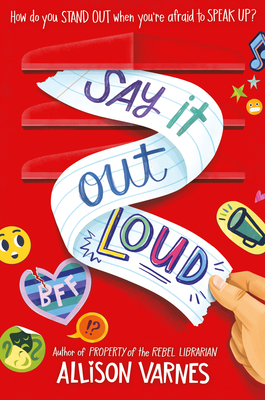 Say It Out Loud (Hardcover)


Usually Ships in 1-5 Days. Please note that sometimes a book is available on our website but not currently on the store shelves
An empowering look at finding your voice, facing your fears, and standing up for what's right, from the author of Property of the Rebel Librarian.

Charlotte Andrews is perfectly fine being quiet--in fact, she prefers it. When she doesn't speak, people can't make fun of her stutter. But when she witnesses bullying on the school bus and doesn't say anything, her silence comes between her and her best friend.

As if that wasn't bad enough, her parents signed her up for musical theater. Charlotte doesn't want to speak onstage, but at least she doesn't stutter when she sings. Then, just as she starts to find her voice, the arts program is cut. Charlotte can't stay silent anymore.

So she begins to write. Anonymous encouraging notes to her classmates. Letters to the school board to save the school musical. And an essay about the end of her best friendship--and her hope that she can still save it.

Words could save Charlotte Andrews and everything she believes in . . . if she just believes in herself enough to speak up.
Allison Varnes taught English in special education for eight years and once had to convince administrators that The Lion, the Witch and the Wardrobe is not an endorsement of witchcraft. She's from a family of teachers and has a PhD in education from the University of Tennessee. When she's not writing, she howls along to the Hamilton soundtrack with a trio of Chihuahuas named after Peanuts characters. Find her on Twitter at @allisonvarnes or on Facebook at facebook.com/allisonvarnesauthor.
“Varner’s got a knack for capturing the middle school experience and readers in this age group will see themselves reflected in the cast of characters and situations that make up the story. The book could also serve as a springboard for topics such as bullying (cyber and physical) and even plagiarism.” –School Library Journal