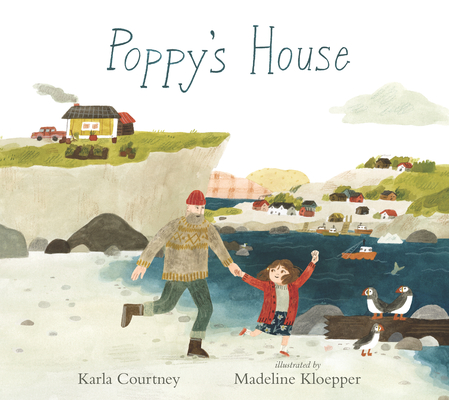 
On Our Shelves Now
A warm story of the bond between young and old that evokes the wild, windswept banks of Newfoundland—and the joys of a traditional way of life.

In a picture book as cozy as wool socks and as sweeping as a lighthouse beam, a little girl takes a ferry to an island to spend time with her Poppy. After fresh-baked bread for breakfast, the two tidy up, garden, and set out to explore together. They pass docks and green hills specked with puffins, counting their favorite things along the way: masts, animal tracks, silvery waves. At the end of each day, they snuggle on Poppy’s worn velvet armchair to read by lantern light. When it’s time to travel home, the little girl begins counting the days until she and Poppy will be together again. A patchwork of exquisitely patterned and textured art evokes a traditional quilt in this ode to coastal Canada and to the days spent with an attentive, caring older person.
Karla Courtney is a travel and lifestyle writer and hand knitter who grew up in Toronto and spent summers in Newfoundland, where her Nanny taught her the ways of wool. Her work has been published in Parents magazine, Quantas, Vanity Fair, and the Times (London). Poppy’s House is her first story for children. She lives in England.

Madeline Kloepper is the author-illustrator of Outside Art and has illustrated many books for young readers, including Tiny, Perfect Things by M. H. Clark and Little Blue Chair by Cary Fagan. Madeline Kloepper lives in Prince George, British Columbia.
The illustrations, done in colored pencils and gouache, fit the mood of the story perfectly. . . . A lovely picture book to add to any collection.
—School Library Journal