The Yellow Emperor's Classic of Medicine: A New Translation of the Neijing Suwen with Commentary (Paperback) 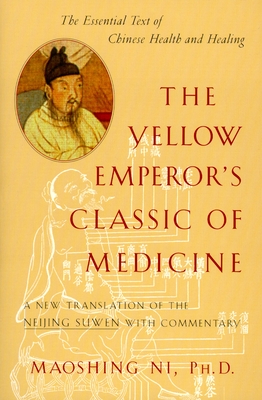 The Yellow Emperor's Classic of Medicine: A New Translation of the Neijing Suwen with Commentary (Paperback)


Usually Ships in 1-5 Days. Please note that sometimes a book is available on our website but not currently on the store shelves
The Neijing is one of the most important classics of Taoism, as well as the highest authority on traditional Chinese medicine. Its authorship is attributed to the great Huang Di, the Yellow Emperor, who reigned during the third millennium BCE. This new translation consists of the eighty-one chapters of the section of the Neijing known as the Suwen, or "Questions of Organic and Fundamental Nature." (The other section, called the Lingshu, is a technical book on acupuncture and is not included here.)

Written in the form of a discourse between Huang Di and his ministers, The Yellow Emperor's Classic of Medicine contains a wealth of knowledge, including etiology, physiology, diagnosis, therapy, and prevention of disease, as well as in-depth investigation of such diverse subjects as ethics, psychology, and cosmology. All of these subjects are discussed in a holistic context that says life is not fragmented, as in the model provided by modern science, but rather that all the pieces make up an interconnected whole. By revealing the natural laws of this holistic universe, the book offers much practical advice on how to promote a long, happy, and healthy life.

The original text of the Neijing presents broad concepts and is often brief with details. The translator's elucidations and interpretations, incorporated into the translation, help not only to clarify the meaning of the text but also to make it a highly readable narrative for students—as well as for everyone curious about the underlying principles of Chinese medicine.
Maoshing Ni, Ph.D., is a doctor of Oriental medicine and a licensed acupuncturist in Santa Monica, California. He is also the author of Chinese Herbology Made Easy and The Tao of Nutrition.
"Pondering how best to describe this distinctly innovative translation of the Neijing, the most apt image would be the instant clarity revealed by wiping a steam-misted mirror. Suddenly everything is clear."— American Journal of Acupuncture