How Can I Talk If My Lips Don't Move?: Inside My Autistic Mind (Paperback) 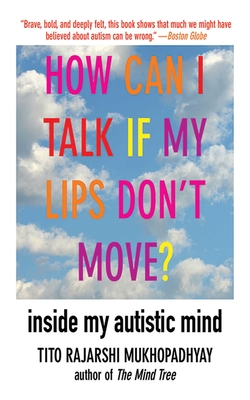 How Can I Talk If My Lips Don't Move?: Inside My Autistic Mind (Paperback)


Backordered
An astounding new work by the author of The Mind Tree that offers a rare insight into the autistic mind and how it thinks, sees, and reacts to the world. When he was three years old, Tito was diagnosed as severely autistic, but his remarkable mother, Soma, determined that he would overcome the “problem” by teaching him to read and write. The result was that between the ages of eight and eleven he wrote stories and poems of exquisite beauty, which Dr. Oliver Sacks called “amazing and shocking.” Their eloquence gave lie to all our assumptions about autism. Here Tito goes even further and writes of how the autistic mind works, how it views the outside world and the “normal” people he deals with daily, how he tells his stories to the mirror and hears stories back, how sounds become colors, how beauty fills his mind and heart. With this work, Tito—whom Portia Iversen, co-founder of Cure Autism Now, has described as “a window into autism such as the world has never seen”—gives the world a beacon of hope. For if he can do it, why can’t others? “Brave, bold, and deeply felt, this book shows that much we might have believed about autism can be wrong.”—Boston Globe
Tito Rajarshi Mukhopadhyay was diagnosed in early childhood with severe or low functioning non-verbal autism. He communicates primarily through writing and has learned to develop his reading, writing, and thinking abilities. The national organization Autism Speaks sponsored Tito and his mother, Soma, to come to the United States so he could participate in scientific trials. Tito is now an accomplished writer. He lives in Austin, Texas.