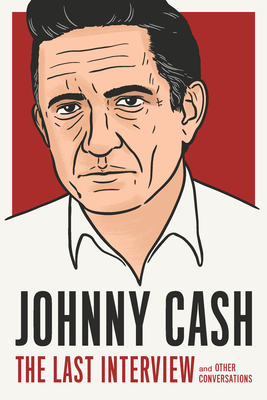 
Usually Ships in 1-5 Days. Please note that sometimes a book is available on our website but not currently on the store shelves
Johnny Cash seemed like the stuff of legend when he was alive, and even more so as he achieved something close to sainthood in death. The interviews collected here bring us closer to the actual man: brilliant, falliable, introspective, and longing for redemption.

Mythmaker, philosopher, sinner, and saint, Johnny Cash is perhaps the quintessential American icon. Though often rebellious and unruly, he rarely spoke without intention, sincerity, and a bit of poetry. Together with an introduction by music critic Peter Guralnick, the interviews here spotlight that inimitable rhetorical style, and the fascinating diversity of subjects that made him as relatable as he was mysterious. From a hopped up early interview with Pete Seeger, to a meditation on sobriety, to the last interview in which he stares calmly into the face of death, this collection brings together decades of insight as deeply profound as the unforgettable baritone of The Man in Black himself.
Johnny Cash (born J. R. Cash; February 26, 1932 - September 12, 2003) was an American singer, songwriter, musician, actor, and author. He is one of the best-selling music artists of all time, having sold more than 90 million records worldwide. His genre-spanning songs and sound embraced country, rock and roll, rockabilly, blues, folk, and gospel. This crossover appeal won Cash the rare honor of being inducted into the Country Music, Rock and Roll, and Gospel Music Halls of Fame.

Peter Guralnick has been called “a national resource” by critic Nat Hentoff for work that has argued passionately and persuasively for the vitality of this country’s intertwined black and white musical traditions. His books include the prize-winning two-volume biography of Elvis Presley, Last Train to Memphis and Careless Love; Searching for Robert Johnson; Sweet Soul Music; and   Dream Boogie: The Triumph of Sam Cooke.