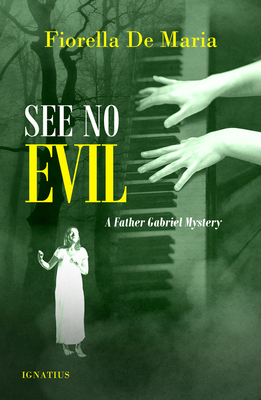 
Usually Ships in 1-5 Days. Please note that sometimes a book is available on our website but not currently on the store shelves
In this third title in the Father Gabriel Mystery series, the detective priest is less than pleased to find himself the reluctant guest at a wealthy local family's Christmas party. Only the excellent – and probably black market – food softens

the horror of meeting the odious Victor Gladstone, veteran reporter, ardent anti-clerical and the only witness to a war- time massacre no one wishes to hear about. When Victor is found dead on the Martin estate the next morning, the apparent victim of an unfortunate accident, Gabriel once again finds himself drawn into the mystery of who among the family's chattering guests could have wanted the old man dead.

What starts as a possible domestic murder at the hands of Victor's mentally incapacitated daughter, quickly propels Gabriel into a dangerous criminal underworld, where Nazi loot is bought, sold – and perhaps killed for. With help from his old school friend Alan Ellsmore, now an eminent archivist, Gabriel struggles to piece together Victor's final months, but a return to London means confronting his own troubled past and the memory of the wife he lost many years before.

Like any good reporter, Gabriel quickly realizes that Victor Gladstone had a nose for rotten behavior, but as Gabriel's investigation moves towards its tragic conclusion, he faces the stark possibility: It may not be a question of who is guilty of Victor Gladstone's murder, but is anyone truly innocent?

This mystery focuses on the issue of indirect involvement in immoral behavior, particularly the sale of property stolen from victims of the Nazis and the difficulties faced by witnesses to Nazi crimes in the years following the war.
Fiorella De Maria was born in Italy of Maltese parents. She grew up in Wiltshire, England, and attended Cambridge University, where she received a Bachelor’s in English Literature and a Master’s in Renaissance Literature. She lives in Surrey with her husband and children. A winner of the National Book Prize of Malta, she has published four other novels with Ignatius Press: Poor Banished Children, Do No Harm, We'll Never Tell Them and the first Father Gabriel mystery, The Sleeping Witness.