This Hill, This Valley: A Memoir (American Land Classics) (Paperback) 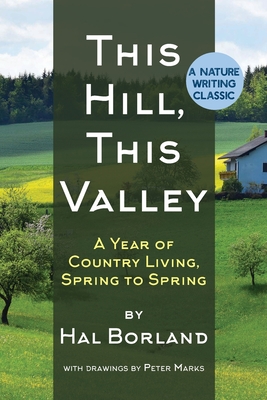 This Hill, This Valley: A Memoir (American Land Classics) (Paperback)

An Inspiring Year on a New England Hill Farm

Hal Borland, whose nature essays graced the Sunday New York Times for almost 4 decades, transported readers to a simpler time and place by his intimate perspective on weather, flowers, birds, and the changing seasons. After being hospitalized with a dangerous bout of appendicitis and reassessing his values, he and his wife decided to retreat to a farm in the Berkshire Hills of northwest Connecticut. From that place-for 36 years-he composed the essays which provided a calming rejuvenation for his legions of avid followers.

Borland describes his process: "We came here, not to a cabin in the wilderness but to a farmhouse beside a river. I have spent the months and years since, living with this small fraction of the universe and trying to know its meaning-to own it, that is, in terms of observation and understanding."

This Hill, This Valley ushers us eloquently through a year on the farm in an area known as Weatogue: Spring: ("The apple trees are in bloom, and a magnificent sight"); summer: ("One of the most difficult of all sounds to put down on paper is the song of a bird."); autumn: ("October is the fallen leaf, but it is also the wider horizon more clearly seen."); winter: ("The sparrows make Winter a pleasanter time for any countryman.")

Deeply satisfying, these classic vignettes may be enjoyed for just a few minutes or all afternoon.