Know That What You Eat You Are: The Best Food Writing from Harper's Magazine (The American Retrospective Series #6) (Paperback) 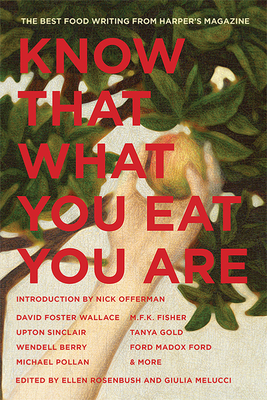 Know That What You Eat You Are: The Best Food Writing from Harper's Magazine (The American Retrospective Series #6) (Paperback)

This collection of food writing from the archives of Harper’sMagazine demonstrates that Americans have been thinking and caring about what and how they eat for more than a century and a half.

The essays in Know That What You Eat You Are have been selected from Harper’s Magazine’s 167-year history and feature such celebrated writers as M.F.K. Fisher, Upton Sinclair, Ford Madox Ford, Wendell Berry, David Foster Wallace, and Michael Pollan, and many more.

Learn how a propermeal was served in 1875, the secrets of Jackie Kennedy’s seafood and potato chip casserole, and how to forage for wild mushrooms and survive. There are chilling accounts of efforts to innovate new foods (Fritos, for instance) and preserve them for the late 20th century’s burgeoning consumer culture. There are stories of foods coldly regarded as mere commodities (hello, Quinoa) and others that expound on how ensuring that we eat good, healthy food is a responsibility we all share. One of the latest pieces in the book is a hilarious crawl though the excess and absurdity of early 21st century dining in New York City that will have readers laughing deeply from their bellies while wondering if they might desire to fill it with an inflated pig’s bladder. Another is a moving elegy on eating after cancer has taken that pleasure away.

As the actor (Parks and Recreation), writer, documentarian and woodworker Nick Offerman states in his introduction, “this satisfying spread of essays, while an excellent tasting menu of the many-faceted relations between Americans and their foodstuffs, serves as a clear journal of ways in which we have done our eating right, and of course, how we have burnt the toast to a crisp.”

Giulia Melucci was born and raised in Brooklyn, New York, where she still lives, but in a more fashionable neighborhood. She graduated from Sarah Lawrence College in 1988 and is vice president of public relations at Harper's Magazine. She is the author of I Loved, I Lost, I Made Spaghetti: A Memoir of Good Food and Bad Boyfriends, which was also made into a play.

Nick Offerman is an award-winning actor, writer, and woodworker. He has been featured in numerous movies and TV shows and is best known for his role as Ron Swanson on Parks & Recreation. He recently starred with Michael Keaton in The Founder and premiered two films at the 2017 Sundance Film Festival. He has several comedy specials such as American Ham from 2014 and Summer of 69: No Apostrophe with his wife, Megan Mullally, from 2017. Offerman is a New York Times bestselling author of Paddle Your Own Canoe: One Man's Fundamentals for Delicious Living, Gumption: Relighting the Torch of Freedom with America's Gutsiest Troublemakers, and Good Clean Fun: Misadventures in Sawdust at Offerman Woodshop.