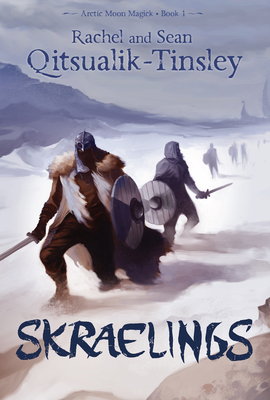 A historical coming-of-age story set in the arctic landscape

In this adventurous novel—set in the ancient Arctic, but told by an inquisitive and entertaining contemporary narrator—a wandering Inuit hunter named Kannujaq happens upon a camp in grave peril. The inhabitants of the camp are Tuniit, a race of ancient Inuit ancestors known for their strength and shyness. The tranquility of this Tuniit camp has been shaken by a group of murderous, pale, bearded strangers who have arrived on a huge boat shaped like a loon. Unbeknownst to Kannujaq, he has stumbled upon a battle between the Tuniit and a group of Viking warriors, but as the camp prepares to defend itself against the approaching newcomers, Kannujaq discovers that the Vikings may have motivations other than murder and warfare at the heart of their quest. This lush historical fiction is steeped in Inuit traditional knowledge and concepts of ancient Inuit magic.

Of Inuit ancestry, Rachel Qitsualik-Tinsley was born into the traditional 1950's culture of iglu-building and dog-sledding, later becoming a translator, writer, and activist. She is a scholar of world religions, and considered an authority on Inuit language, mythology, and pre-colonial religion. She has published several hundred articles, as well as many mythic retellings and works of original fiction. Her current projects focus on utilizing fiction to discuss unique Inuit mystical and philosophical concepts stemming from Inuit cosmology of the pre-contact period. Her goal is to reveal, for all readers, the secret thought and sophistication behind Inuit cosmology. She has published for a wide range of ages, her work having been accessed as university course content. In 2012, she received a Queen Elizabeth II Diamond Jubilee Award for her written contributions to Canadian culture.

Of mixed heritage, Sean Qitsualik-Tinsley enjoyed a multicultural background steeped in naturalism, before training as a writer in Toronto. He is a literatist of world religions, comparative esoterism, and mythology, having come to focus on Inuit pre-colonial cosmology. After receiving an international award for a speculative fiction short (Green Angel, 2005), he undertook the task of showcasing the unique flavour of pre-colonial Inuit imagery, combining speculative fiction elements with the world-setting of ancient Inuit thought. He is fascinated by the deep structure and "magical histories" borne in mythical allegory. His fiction and non-fiction, some of which has been accessed as university content, addresses a general range of ages.