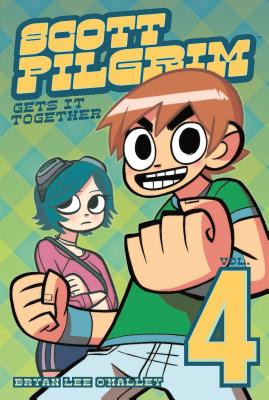 This is book number 4 in the Scott Pilgrim series.

That’s right, folks! Put down the video game controller! Skip that rehearsal for your band! Make whatever sacrifices you must to those comic gods you hold so dear! Just make sure you’re ready because Bryan Lee O’Malley and SCOTT PILGRIM are back! Well, a couple months have passed since the last time we caught up with our intrepid hero, but what can change in a few short months? Well, not much has... Scott’s still living with his roommate Wallace Wells. He’s still playing in a mediocre rock band named Sex Bob-omb. And most importantly, he’s still dating the lovely Ramona Flowers while working his way through the gaggle of superpowered, superstylish, superevil ex-boyfriends determined to take him down. But something is different. Don’t look now, but Scott Pilgrim may actually be getting it together. And it’s a good thing, too, because Scott is about to confront Ramona’s most intimidating ex yet!
Bryan Lee O'Malley is a Canadian cartoonist best known for the bestselling, award-winning Oni Press series "Scott Pilgrim" (2004-2010). "Scott Pilgrim" was adapted into a critically-acclaimed major motion picture (from Universal) and video game (from Ubisoft) in 2010. O'Malley lives in Los Angeles, where he continues to make comics.