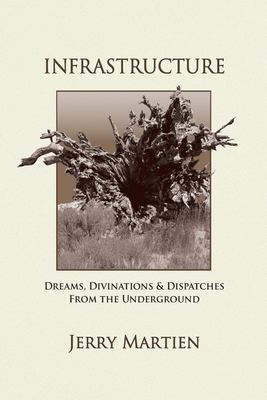 This is the infrastructure of a poet's life. A kid in love reading to his first-grade teacher. An old man walking with friends in an Oregon forest. A carpenter on the courthouse steps, telling how to build a place of refuge. With his wife, Jenny, hearing war planes over a desert hot spring. On Nascar Demolition Derby Night at the Modoc County Fair. It was better than the Iraq War. No one was killed. Admission was only eight dollars.

A poem uncovers the underworld's plot to overthrow Christmas and capitalism. Another records a watershed meeting, the multi-species discussion of whether to let the humans in. In a state park on an overgrown trail, crossing a rotten bridge, the title poem tries to answer Jenny's question: how did it get like this?

A poem requested for a friend whose young son just died in a senseless accident. The infrastructure we turn to: fledgling swallows on a power line, big mouths, pale fluff, scared and hungry. How soon they'll fly and be gone. We live in a nest of broken shells.

On the Big Island a quarter-mile-long ten-foot wall, huge carved blocks of lava, yet with a wide open gate to those seeking refuge. On the eastern slope of the Sierras, a circular pool of concrete and stone, three Vietnam vets soak in our common history. In a repair shop on Broadway, LouAnn who has small hands is replacing a burned-out headlight. I can't even get to it. The other guy in the waiting room has just come from taking his wife to the cancer clinic. We talk about when cars were real.

Looking for infrastructure in a world that's been designed to break and not be fixed.