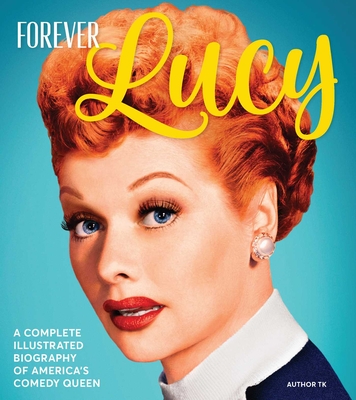 
Usually Ships in 1-5 Days. Please note that sometimes a book is available on our website but not currently on the store shelves
Celebrate the woman behind the iconic character: a comic genius, perfectionist, loyal wife and friend, savvy businesswoman and devoted mother. We’ll explore how the shy girl from Jamestown, N.Y., made the move from model to showgirl to B-movie actress and ultimately became the undisputed Queen of Comedy; tell how she fell head-over-heels for a Cuban dynamo and the two went on to realize the greatest show-business success story ever.

More than thirty years after her death, Lucille Ball still reigns supreme as the Queen of Comedy. The first woman to run a major Hollywood studio is best known for her iconic television series I Love Lucy, but the New York native worked for years as a model, chorus girl and supporting actress in the movies before finding superstardom on the small screen. Forever Lucy takes a look back at the Hollywood treasure's life, from her tumultuous early days being raised by a widowed mom, to her bit parts in Fred Astaire and Marx Brothers movies, to her love affair with a Cuban bandleader named Desi Arnaz and their overwhelming success as America's most beloved TV couple. We explore what drove Lucy to break down barriers in Tinseltown and her career resurgence in the 1970s and '80s. This book examines the public and private life of a beloved Hollywood legend. It is the remarkable story of a comic genius who was light-years ahead of her time.
David Schonauer has written on subjects ranging from the Apollo 11 moon mission and rock climbing to environmental law and the history of paparazzi photography. His work has appeared in The Atlantic, The New York Times, Smithsonian, Outside and many other publications. He is the former editor in chief of American Photo magazine and the recipient of the National Magazine Award. He lives in Beacon, New York.