If It's Not Right, Go Left: Practical and Inspirational Lessons to Move You in a Positive Direction (Hardcover) 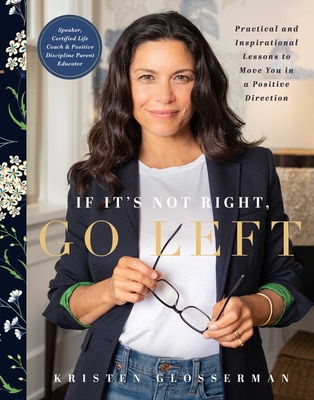 If It's Not Right, Go Left: Practical and Inspirational Lessons to Move You in a Positive Direction (Hardcover)

“Kristen Glosserman’s If It’s Not Right, Go Left is an upbeat and approachable lifestyle guide that’s structured around  eleven transformative lessons….Her presence fills the pages of the book.”

Everyone gets stuck sometimes. Whether it’s a personal loss, an aimless career, or a difficult breakup, many people find themselves unsure where to take their next steps. Kristen Glosserman—goal-setting strategist, life coach, and mother of four—offers wise guidance and direction, using examples culled from her own inspiring life.

In light of her own family tragedy and personal struggles, Kristen formulated a plan to regain sight of her goals, now made accessible to readers. She heads each section of If It’s Not Right, Go Left with a life lesson, including:

Each chapter builds on the idea that life will happen no matter what, and it’s up to us to respond accordingly. Readers will be drawn to gorgeous illustrations alongside a wealth of constructive lessons in order to accomplish the lifestyle changes they need.

If It’s Not Right, Go Left teaches that connection, communication, and collaboration bring change, and it takes only the actionable guidance offered by Kristen to pivot towards one’s achievable goals.

PRAISE FOR IF IT’S NOT RIGHT, GO LEFT:

"Kristen is a steady, patient reminder of doing what you can, celebrating the good stuff, and not beating yourself up about what you didn't do. There's always tomorrow."

“If It’s Not Right, Go Left is a wonderfully natural direction for Kristen—a chance to share her guidance and wisdom with all.”

“Those who find themselves in a rut may appreciate the nudges.”

Kristen Glosserman – “The Possibility Expert” – has coached numerous successful corporations and individuals to maximize their strengths and capabilities for more than ten years, including executives from Wall Street, Ralph Lauren, and American Express. They come to Kristen for practical, straightforward advice that works. With her signature blend of contagious dynamism and genuine warmth, this in-demand executive and life coach is dedicated to helping people embrace possibility, create positive change in their lives and careers, and achieve their “best version.”

A protégé of renowned executive coach Sherry Lowry, Kristen holds coaching certifications from the Institute of Life Coach Training and New York University, and studied at Coach U and the University of Pennsylvania’s Wharton School. Having competed at the elite level in gymnastics and trained under famed sales expert and author Steve Schiffman, she knows how to thrive in high-pressure environments. A graduate of Penn State University with degrees in Speech Communications and Psychology, Kristen has worked as a manager of corporate and Internet sales teams at Xerox Corp., and as manager of sales operations for ELink Communications. She regularly taps her extensive sales experience to help her coaching clients perfect their skills, improve personal discipline, foster resilience, and create opportunity.

As coach and confidant, Kristen champions her clients as they work to achieve the amazing possibilities they envision, whether they are training for a marathon or want to improve their parenting game. Never one to rest on her laurels, Kristen continually strives to set new goals for herself and her unique coaching practice.

Kristen is co-owner of Hill Country Barbecue Market with her husband Marc and together, they support No Kid Hungry – Share Our Strength and City Harvest. A longtime supporter and former board member of the Madison Square Park Conservancy, Kristen founded A Texas Toast, a fundraising event that has raised nearly $1 million for Madison Square Park. She also served as co-chairman of No Kid Hungry: Cookies and ‘Cue, a holiday fundraiser.

Kristen lives in Manhattan with her husband and four children. The family spends large portions of the summer in the Hamptons and Kristen can often be spotted running, dancing, and enjoying stand up paddle board yoga in Sag Harbor.

Liza Gershman is a best-selling author and winner of the Gourmand Cookbook Award (2018), has 17 published books, including Cuban Flavor, which was touted on CBS, National Geographic, Travel & Leisure, NPR, and more. Liza was honored to speak for “Talks At Google,” and on the prestigious campuses of Twitter, Oracle, and Disney. Her clients include Williams-Sonoma, Goldman Sachs, Hyatt Hotels, Restoration Hardware, Getty Images, AirBnB, and Visa. In 2010, Liza was Governor Jerry Brown’s campaign photographer, and in 2014 was a photographer for America’s Cup. She’s photographed in more than fifty-four countries and forty-seven states. She specializes in creative direction, art direction, styling, writing, and photography.

Born in California, based in New York, Madison Fender is always down for an adventure. She has been photographing people, places and things professionally on the east end of Long Island for about 6 years.

"As long as I've known Kristen, I've admired her desire and willingness to make the experience of her own life a little better. Her principles create radical change with simple shifts and now my life is better for it." —Kindra Hall, Wall Street Journal bestselling author of Stories that Stick and chief storytelling officer at Success magazine

"With her generous smile and hearty laugh, Kristen is a steady, patient reminder of doing what you can, celebrating the good stuff, and not beating yourself up about what you didn't do. There’s always tomorrow." —Rina Stone, Creative Director, InStyle magazine

"As [Kristen Glosserman] says, life isn’t always perfect, but we have the power, the right, and the ability to rise above and learn from every teachable moment." —David Kirsch, fitness/wellness expert and bestselling author

"If It’s Not Right, Go Left shows me that when life comes with unexpected change, I can navigate through that change so I can manage my time, energy, and job in a positive way." —Tracy Margolies, chief merchant, Saks Fifth Avenue

"[Glosserman's] presence fills the pages of the book, which are complete with personal stories of both her successes and failures, without infringing on the book’s mission: to encourage everyone to live, and to write their own life stories, well." —Foreword Reviews

"Life coach Glosserman draws on her experiences working through grief and helping others do the same….those who find themselves in a rut may appreciate the nudges." —Publishers Weekly