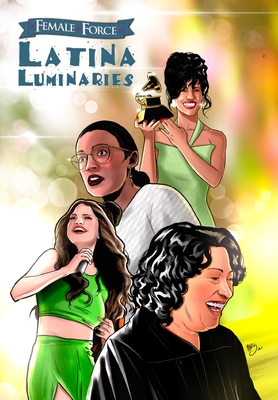 America is a multicultural nation, and all eyes are on the ever-growing leadership rising out of the Latin community. "Female Force" is a series that celebrates and honors women that have empowered others in the world.

Sonia Sotomayor is the first Hispanic and only the third woman to serve on the Supreme Court. Born in the Bronx, educated at Princeton and Yale, her leadership is inspiring and groundbreaking. Selena Gomez is a young, talented singer and actor It has been a meteoric rise from girl-next-door to Queen of the popular music world. The youngest woman ever to serve in the United States Congress, few politicians have captured the electorate's attention like Alexandria Ocasio-Cortez. To the left side of the political aisle, she's a young, hungry visionary who isn't afraid to buck the system to serve as the voice of her generation. Lastly, Sonia Sotomayor, Selena Gomez, Selena Quintanilla is arguably one of the brightest performers of the 1980s and 1990s. Her popularity has surged recently, driven by her strong vocals and incredible stage performances.

TidalWave is proud to present the stories of the women shaping our politics and pop culture.

The "Female Force" imprint features prominent and influential authors, business executives, entertainers, journalists, politicians, and activists. The latest biography comic book joins TidalWave's ever-growing library of more than 200 comic book biographies. - Previous titles have profiled Mother Teresa, Kamala Harris, Tina Fey, Betty White, Michelle Obama, Barbra Streisand to Cher and Gloria Steinem. These biographical comics, written by some of the most talented writers in the comic world and beyond, deliver an informed and illustrated look into the lives of these figures.

The biographical comic series has drawn a firestorm of media attention, including features on "The Today Show" CNN, MSNBC and FOX News, and in Time and People magazines.