Port Newark and the Origins of Container Shipping (Hardcover) 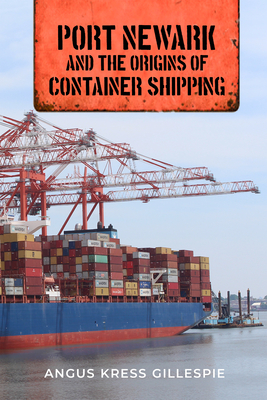 Port Newark and the Origins of Container Shipping (Hardcover)


Usually Ships in 1-5 Days. Please note that sometimes a book is available on our website but not currently on the store shelves
Container shipping is a vital part of the global economy. Goods from all around the world, from vegetables to automobiles, are placed in large metal containers which are transported across the ocean in ships, then loaded onto tractor-trailers and railroad flatbeds. But when and where did this world-changing invention get started?

This fascinating study traces the birth of containerization to Port Newark, New Jersey, in 1956 when trucker Malcom McLean thought of a brilliant new way to transport cargo. It tells the story of how Port Newark grew rapidly as McLean’s idea was backed by both New York banks and the US military, who used containerization to ship supplies to troops in Vietnam. Angus Gillespie takes us behind the scenes of today’s active container shipping operations in Port Newark, talking to the pilots who guide the ships into port, the Coast Guard personnel who help manage the massive shipping traffic, the crews who unload the containers, and even the chaplains who counsel and support the mariners. Port Newark shines a spotlight on the unsung men and women who help this complex global shipping operation run smoothly.


Since McLean's innovation, Port Newark has expanded with the addition of the nearby Elizabeth Marine Terminal. This New Jersey complex now makes up the busiest seaport on the East Coast of the United States.  Some have even called it “America’s Front Door.”  The book tells the story of the rapid growth of worldwide containerization, and how Port Newark has adapted to bigger ships with deeper channels and a raised bridge. In the end, there is speculation of the future of this port with ever-increasing automation, artificial intelligence, and automation.
ANGUS KRESS GILLESPIE is a professor of American Studies at Rutgers University.  His many books about the cultural implications of civil engineering include Looking for America on the New JerseyTurnpike (1989), coauthored with Michael Aaron Rockland, recognized by the New Jersey State Library as one of the ten best books ever written about the state.

"Angus Gillespie tells a riveting story that includes political intrigue, labor conflict, crime, racial strife, charity work, and the impacts of globalization. The narrative of Port Newark, one of the busiest ports on earth, is about a small point on the map. Yet its story is the story of the consumer world we live in."
— Simon J. Bronner

"Port Newark takes a fresh look at the often-overlooked history of containerization, beginning with its inception in 1956. Gillespie’s writing is free of academic jargon, richly illustrated, and readable. Port Newark is essential reading for all maritime aficionados."
— Daniel A. Dermer