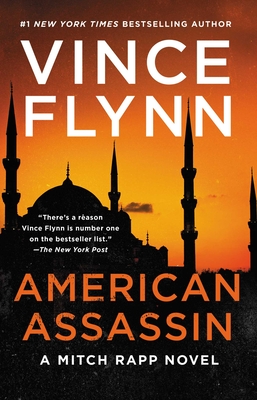 This is book number 1 in the A Mitch Rapp Novel series.

Mitch Rapp was a gifted college athlete without a care in the world…and then tragedy struck. Terrorists attacked innocent American citizens, and Rapp’s girlfriend was among the murdered. Two hundred and seventy souls perished on that cold December night, and thousands of family and friends were left searching for comfort. Mitch Rapp was one of them, but he was not interested in comfort. Now he wants retribution.

Two decades of cutthroat partisan politics have left the CIA and the country in an increasingly vulnerable position. Cold War veteran CIA Operations Director Thomas Stansfield knows he must prepare his people for the next war. America must confront Islamic terrorism with full force. Stansfield directs his protégée, Irene Kennedy, and his old Cold War colleague, Stan Hurley, to form a new group of clandestine operatives who will work outside the normal chain of command—men who do not exist.

What type of man is willing to kill for his country without putting on a uniform? Six months of intense training have prepared him to take the war to the enemy’s doorstep, and he does so with brutal efficiency. Rapp starts in Istanbul, where he assassinates the Turkish arms dealer who sold the explosives used in the terrorist attack. Rapp then moves on to Hamburg with his team and across Europe, leaving a trail of bodies. All roads lead to Beirut, though, and what Rapp doesn't know is that the enemy is aware of his existence and has prepared a trap. The hunter is about to become the hunted, and Rapp will need every ounce of skill and cunning if he is to survive the war-ravaged city and its various terrorist factions.

This is “a bold and brawny tale that never wavers or lets up. The voice of today’s postmodern thriller generation, Flynn has never been better” (The Providence Journal) in this unforgettable novel of a young man primed to become an American assassin.
#1 New York Times bestselling author Vince Flynn (1966–2013) created one of contemporary fiction’s most popular heroes: CIA counterterrorist agent Mitch Rapp, featured in thirteen of Flynn’s acclaimed political thrillers. All of his novels are New York Times bestsellers, including his stand-alone debut novel, Term Limits.