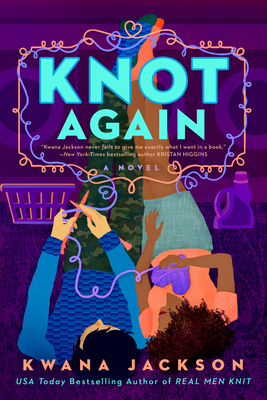 This is book number 2 in the Real Men Knit series series.

Sometimes fireman Lucas Strong feels like he can only find any peace and quiet at the local laundromat, where every day is rinse and repeat — until a fateful run-in with his high school crush.

Hoping to attract more customers to his family’s knitting shop, Lucas Strong participated in an FDNY charity calendar and accidentally became a local celebrity. The only place he can find solace is Scrubs—a 24/7 laundromat where he can disappear for a couple of hours. But Lucas’s soapy sanctuary is shaken by an inquisitive little girl with a late-night interest in knitting, whose mother is his old school crush.

Sydney Harris knows that Harlem is like any other small town, and everyone is probably whispering about how she left such a good man—and a good life—behind to wash and fold laundry by the pound. If only they knew the truth. But Sydney will always put her daughter’s happiness first, even if that means moving back to Harlem and facing her past.

What Sydney never expected was to see Lucas again. A long-forgotten attraction kicks into high gear as Lucas and Sydney start to spend time together at the laundromat, and they must decide if this is true love or just an infatuation, thin and fragile as a soap bubble.
A native New Yorker, Kwana Jackson had two dreams: (1) to be a fashion designer and (2) to be a writer. After studying fashion design and graduating from FIT, she spent ten years designing for various fashion houses. But after having twins and juggling both them and fashion, Kwana took a leap of faith and decided to pursue her other dream of being a writer. Since then she's won RWA NYC's Golden Apple Author of the Year Award and is a daily advocate for #WeNeedDiverseRomance. She currently lives in a suburb of New York with her husband, their twins and a precocious terrier named Jack who keeps her on her toes.