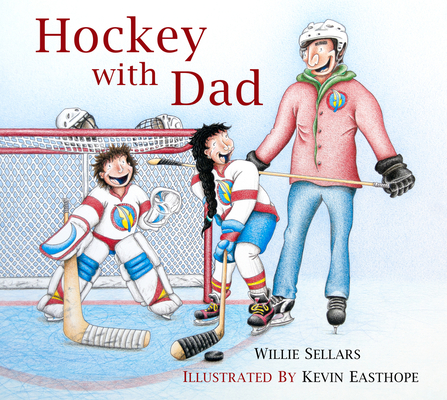 She shoots, she scores! Big Sister’s hockey team has worked hard toward the most important game of the season. When the team goalie gets injured, Little Brother excitedly steps onto the ice to play in the Championship game. He always wanted to be part of the lineup, where Big Sister is the ace forward. The closer the game gets, the more nervous he becomes. Can he and Sister make the community proud? He must rely on his family’s long history of playing hockey, the wisdom of Grandpa, Dad, Big Sister, and the Secwépemc cultural values they impart. The highly anticipated follow-up to the award-winning Dipnetting with Dad, in Hockey with Dad, Little Brother’s adventures continue as he grows and learns about the importance of hockey to his Secwépemc community.

Willie Sellars was born and raised in Williams Lake, BC, and is the Chief of the Williams Lake Indian Band of the Secwepemc Nation. Willie published his first children’s book, Dipnetting with Dad, in 2014, which won a Moonbeam Children’s Book Award, and was shortlisted for the Chocolate Lily, Shining Willow, and Ontario Library Association awards. Willie lives on the Sugar Cane Reserve in BC with his three children.

Kevin Easthope was born and raised in Williams Lake, BC. He attended UBC Okanagan where he graduated with a bachelor of fine arts degree in 2008. His artistic work spans a variety of mediums including oil painting, graphite and graphic design. While he is an artist and musician, he presently makes a living fighting forest fires for the Province of British Columbia.