All Dressed Up Jilly Gagnon

Join us for an in-store event with Salem author Jilly Gagnon in conversation with Lucy Keating!  Get your tickets today. 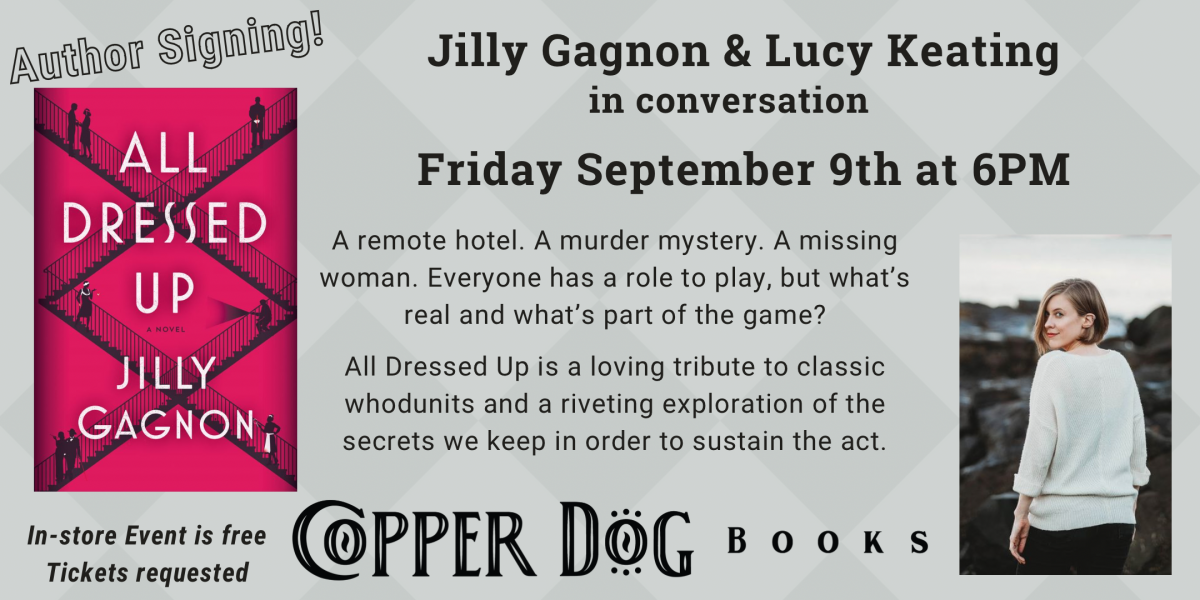 The weekend getaway at a gorgeous hotel should have been perfect. But Becca is smarting from her husband Blake’s betrayal and knows that the trip is just an expensive apology attempt. Still, the drinks are strong, and the weekend has an elaborate 1920s murder mystery theme. She decides to get into the spirit and enjoy their stay. Before long, the game is afoot: Famed speakeasy songstress Ida Crooner is found “murdered,” and it’s up to the guests to sniff out the culprit. Playing the role of Miss Debbie Taunte, an ingenue with a dark past, Becca dives into the world of pun-heavy clues, hammy acting, and secret passages, hoping to take her mind off her marital troubles.Then, the morning after they arrive, the actress playing Ida’s maid fails to reappear for her role. Everyone assumes she flaked out on the job, but when snooping for clues as “Debbie,” Becca finds evidence that the young woman may not have left of her own free will.

Told over a nail-biting forty-eight hours and interspersed with in-game clues, set pieces, and character histories from the flapper-filled mystery nested inside a modern one, All Dressed Up is a loving tribute to classic whodunits and a riveting exploration of the secrets we keep.

Jilly Gagnon is currently based in Salem, Massachusetts, but is originally from Minnesota, a fact she’ll likely inform you of within minutes of meeting you. In addition to her adult fiction, she has authored both young adult and comedy novels.

All Dressed Up: A Novel (Paperback)

Ride with Me (Hardcover)