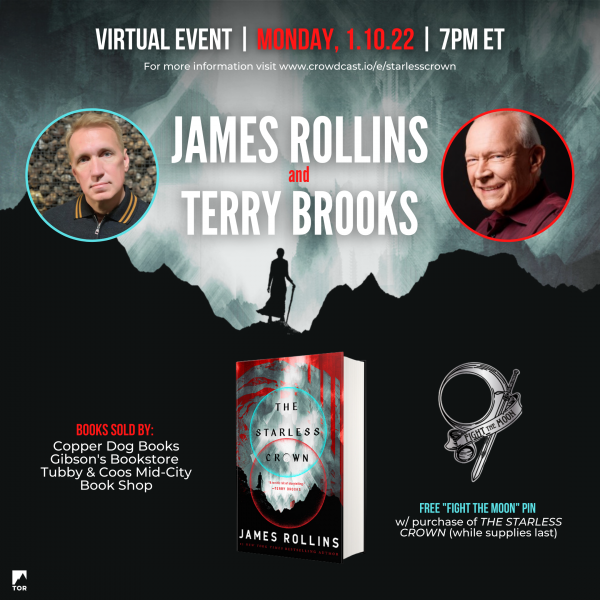 Copper Dog Books invites you to join us for a night in with Tor! Click here to register.

An alliance embarks on a dangerous journey to uncover the secrets of the distant past and save their world in this captivating, deeply visionary adventure from #1 New York Times bestselling thriller-master James Rollins. A gifted student foretells an apocalypse. Her reward is a sentence of death. Fleeing into the unknown she is drawn into a team of outcasts: A broken soldier, who once again takes up the weapons he's forbidden to wield and carves a trail back home. A drunken prince, who steps out from his beloved brother's shadow and claims a purpose of his own. An imprisoned thief, who escapes the crushing dark and discovers a gleaming artifact - one that will ignite a power struggle across the globe. On the run, hunted by enemies old and new, they must learn to trust each other in order to survive in a world evolved in strange, beautiful, and deadly ways, and uncover ancient secrets that hold the key to their salvation. But with each passing moment, doom draws closer. WHO WILL CLAIM THE STARLESS CROWN?

JAMES ROLLINS is the #1 New York Times bestseller of international thrillers, sold to over forty countries. His Sigma series has earned national accolades and has topped charts around the world. He is also a practicing veterinarian, who still spends time underground or underwater as an avid spelunker and diver. At long last, Rollins debuts a major new series that opens a riven world trapped between fire and ice, merging his fascination with the natural world, his love of adventure, and his knowledge of the wonders found at the evolutionary fringes of scientific exploration. It is a fantasy series unlike any attempted before.

Terry Brooks has thrilled readers for decades with his powers of imagination and storytelling. He is the author of more than thirty books, most of which have been New York Times bestsellers. He lives with his wife, Judine, in the Pacific Northwest.

ISBN: 9781250816771
Availability: Usually Ships in 1-5 Days. Please note that sometimes a book is available on our website but not currently on the store shelves
Published: Tor Books - January 4th, 2022

ISBN: 9780593357385
Availability: Usually Ships in 1-5 Days. Please note that sometimes a book is available on our website but not currently on the store shelves
Published: Del Rey - October 19th, 2021