What does a time travel space opera, lesbian gunslingers in space, and a circus on a pleasure moon have in common?  A night with Ren Hutchings, Ciel Pierlot, & Khan Wong! 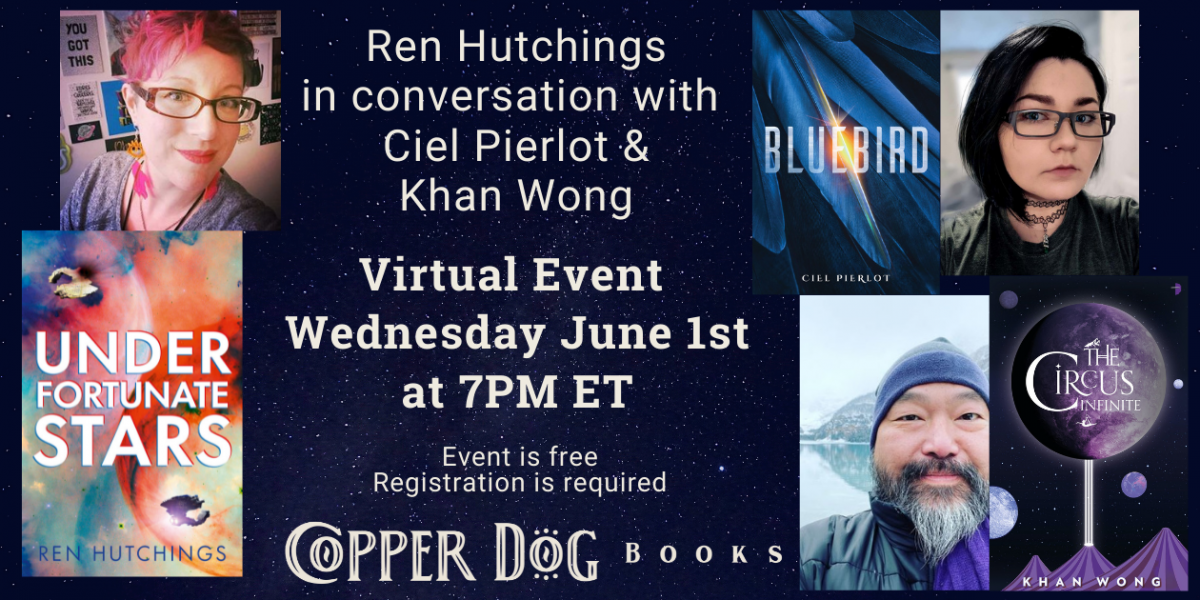 Two Ships. One Chance To Save The Future.

Fleeing the final days of the generations-long war with the alien Felen, smuggler Jereth Keeven’s freighter the Jonah breaks down in a strange rift in deep space, with little chance of rescue—until they encounter the research vessel Gallion, which claims to be from 152 years in the future.

The Gallion’s chief engineer Uma Ozakka has always been fascinated with the past, especially the tale of the Fortunate Five, who ended the war with the Felen. When the Gallion rescues a run-down junk freighter, Ozakka is shocked to recognize the Five's legendary ship—and the Five's famed leader, Eldric Leesongronski, among the crew.

But nothing else about Leesongronski and his crewmates seems to match up with the historical record. With their ships running out of power in the rift, more than the lives of both crews may be at stake…

Ren Hutchings is a speculative fiction writer, writing mentor, and history grad. She spent most of the past decade working in game dev while also plotting twisty space novels. She loves pop science, unexplained mysteries, 90s music, collecting outdated electronics, and pondering about alternate universes. Ren always drafts out of order, and almost everything she writes ends up involving a dash of time travel. You can find Ren online at renhutchings.com, and on social media as @voidcricket.

Three factions vie for control of the galaxy. Rig, a gunslinging, thieving, rebel with a cause, doesn’t give a damn about them and she hasn’t looked back since abandoning her faction three years ago.

That is, until her former faction sends her a message: return what she stole from them, or they’ll kill her twin sister.

Rig embarks on a journey across the galaxy to save her sister – but for once she’s not alone. She has help from her network of resistance contacts, her taser-wielding librarian girlfriend, and a mysterious bounty hunter.

If Rig fails and her former faction finds what she stole from them, trillions of lives will be lost—including her sister’s. But if she succeeds, she might just pull the whole damn faction system down around their ears. Either way, she’s going to do it with panache and pizzazz.

Ciel Pierlot is a disaster bisexual from the San Francisco Bay Area. She’s also a giant nerd and no, you cannot stop her from bragging about her lightsaber collection. When she’s not writing SFF novels, she’s busy being a digital artist and a hardcore gaymer.

A circus takes down a crime-boss on the galaxy’s infamous pleasure moon.

Hunted by those who want to study his gravity powers, Jes makes his way to the best place for a mixed-species fugitive to blend in: the pleasure moon where everyone just wants to be lost in the party. It doesn’t take long for him to catch the attention of the crime boss who owns the resort-casino where he lands a circus job, and when the boss gets wind of the bounty on Jes’ head, he makes an offer: do anything and everything asked of him or face vivisection.

With no other options, Jes fulfills the requests: espionage, torture, demolition. But when the boss sets the circus up to take the fall for his about-to-get-busted narcotics operation, Jes and his friends decide to bring the mobster down. And if Jes can also avoid going back to being the prize subject of a scientist who can’t wait to dissect him? Even better.

Khan Wong has published poetry, played cello in an earnest folk-rock duo, and been an internationally known hula hoop teacher and performer. He’s toured with a circus and produced circus arts shows in San Francisco, where he also worked as a grantmaker with a public sector arts funding agency.

ISBN: 9780857669681
Availability: Usually Ships in 1-5 Days. Please note that sometimes a book is available on our website but not currently on the store shelves
Published: Angry Robot - March 8th, 2022